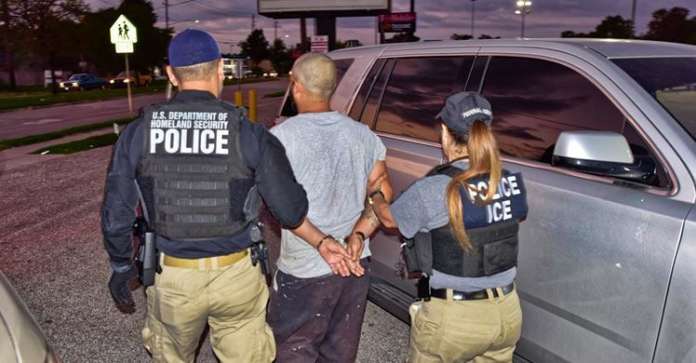 HOUSTON — Deportation officers with U.S. Immigration and Customs Enforcement (ICE) arrested a Mexican man Tuesday who has illegally entered the U.S. on at least five separate occasions and who allegedly threatened to shoot ICE officers.

This investigation is being conducted by ICE Enforcement and Removal Operations (ERO) in Houston, Texas, and Boise, Idaho.

Cesar Diaz-Rodriguez, a 30-year-old illegal alien from Mexico, was arrested Oct. 8 in Houston, Texas, for illegal reentry. Diaz-Rodriguez was previously removed from the U.S. on Oct. 31, 2017, following a felony criminal conviction for unlawful possession of a firearm. Additionally, Diaz-Rodriguez has been voluntarily returned to Mexico three other times; twice in September 2004 and once in October 2011.

In the past month, ICE has received several anonymous tips through the ICE Tip-line that Diaz-Rodriquez had threatened to shoot ICE officers. Acting on those tips, ICE officers were able to locate Diaz-Rodriguez and make the arrest.

“This individual brazenly ignored U.S. immigration law, while simultaneously threatening the lives of the brave men and women sworn to uphold it,” said Patrick Contreras, field office director for ICE Houston. “By working together with our partners from ERO Boise, we have removed this dangerous criminal alien from the community before he could act on those cowardly threats.”
Diaz-Rodriguez remains in ICE custody in Texas pending criminal prosecution for illegal reentry.