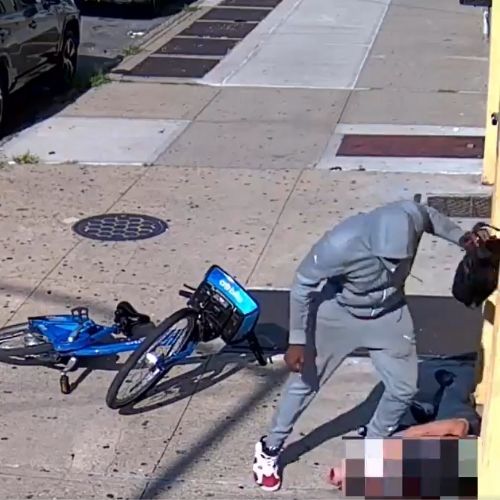 Brooklyn District Attorney Eric Gonzalez today announced that a 21-year-old man from Queens has been indicted of assault and robbery for a vicious daytime attack of a 68-year-old man in East New York, Brooklyn. The brutal beating was caught on surveillance video, leading to the apprehension of the defendant.

District Attorney Gonzalez said, “This defendant allegedly unleashed an unprovoked and violent assault on an elderly man and continued to beat and rob him as he laid unconscious. Such abhorrent and cruel behavior shocks the conscience, and we will now work to make sure that the defendant pays a steep price for his criminal actions.”

The District Attorney identified the defendant as Zamori Simmons, 21, of Jamaica, Queens. He was arraigned today before Brooklyn Supreme Court Justice Matthew Sciarrino on an indictment in which he is charged with second- and third-degree assault, second- and third-degree robbery and other related charges. He was ordered held on $20,000 bond or $10,000 cash bail and to return to court on October 14, 2021. The defendant faces up to seven years in prison if convicted of the top count.

The District Attorney said that, according to the investigation, on July 24, 2021 at about 9:05 a.m., near the corner of Pitkin Avenue and Barbey Street in East New York, the defendant was accosting a woman who asked a 68-year-old-man for help. The defendant then repeatedly punched that man until he fell to the ground, the evidence shows.

As the victim laid defenseless on the ground, the defendant allegedly stomped on his head, ripped a necklace off his neck and stole his cell phone, according to the indictment.

He then fled on a Citi Bike. The victim lost consciousness and was treated in Brookdale Hospital for a broken wrist, multiple orbital fractures and other injuries.

Video surveillance of the attack was disseminated to the media and an anonymous tipster identified the defendant, who surrendered on August 5, 2021 and was placed under arrest.