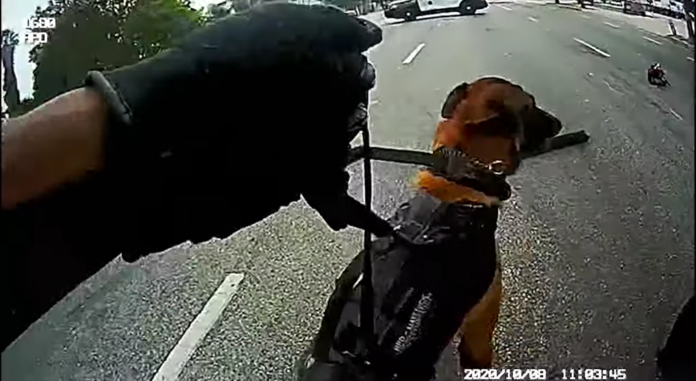 Riverside, CA – On Thursday, October 8, 2020 at 9:50 a.m., the City of Riverside’s Public Safety Communications Center received a call from a person who was following their stolen Honda Accord in the area of Magnolia Avenue and Arlington Avenue, in the city of Riverside. Riverside Police Officers responded and located the occupied stolen vehicle traveling on Magnolia Avenue near Central Avenue. They attempted to conduct a traffic stop on the stolen car but the suspect driver failed to yield and led officers on a pursuit.

The suspect continued going west on Magnolia Avenue at moderate speeds, failing to stop at several red lights. Officers deployed spike strips at two different points during the pursuit but they were unsuccessful in stopping the suspect. As the suspect driver drove south on Van Buren Boulevard from Magnolia Avenue, officers utilized the Pursuit Intervention Technique, or PIT maneuver, which was successful and caused the stolen vehicle to spin around and come to a stop just north of Primrose Drive. Officers then performed a high-risk stop but the suspect refused to comply with commands and surrender.

Over the course of the next 50 minutes, officers attempted to de-escalate the suspect into surrendering peacefully, to no avail. At the same time, tactical resources were summoned that included K-9 and SWAT. In addition, an on-duty officer on the Emergency Negotiations Team responded and began communicating with the suspect driver, who was still refusing to comply.

The Emergency Negotiator was standing near a tree with two officers providing cover while he continued to de-escalate the situation and persuade the suspect into surrendering. At one point, the suspect driver maneuvered the stolen car around and accelerated toward the negotiator and the officers, ultimately striking the tree in an attempt to run them down. An officer involved shooting then occurred. A tactical plan was established and officers safely approached the suspect driver and took him into custody. The suspect was treated by paramedics with the Riverside Fire Department for gunshot wounds then transported to a local hospital in stable condition.

Investigators with the Riverside District Attorney’s Office responded to the scene and assumed the investigation. They are being assisted by detectives with the Riverside Police Department’s Robbery – Homicide Unit, along with Specialists from the Forensics Unit.