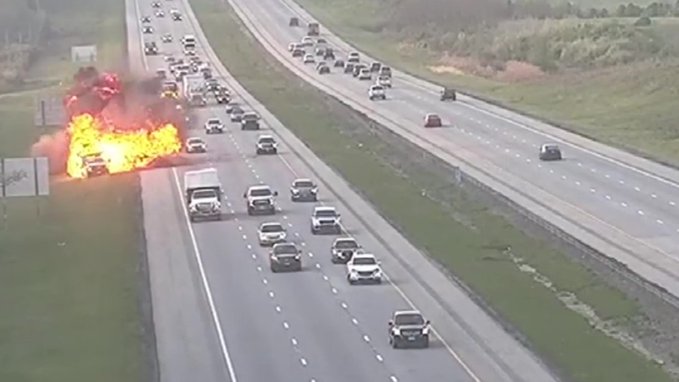 AKRON – Two people were seriously injured when a dump truck collided with a Department of Transportation vehicle Thursday morning.

This morning around 7:20am, the dump truck traveling on I-77 struck an ODOT vehicle. The crash occurred near Graybill Road in the City of Green.

An explosion ensued and both vehicles caught on fire. The dump truck driver was taken to a local hospital with life-threatening injuries.

“Early today, an ODOT District 4 Highway Technician was struck alongside Interstate 77 in the City of Green. He was transported to a local hospital and is currently being treated with serious, but non-life-threatening injuries. We are extremely fortunate he is alive as this could have had a much different outcome. Our thoughts and prayers are with him and his family. This is the 82nd ODOT crew struck this year,” ODOT said in a Facebook post.

I-77 was backed up to Rt. 30 in Canton. The crash is being investigated by the Summit County Sheriff’s Office.