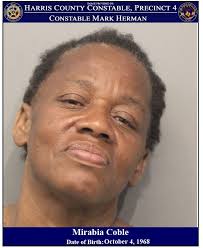 HOUSTON, Texas — On Friday, Harris County Deputies responded to the 10900 block of Jones Road for a welfare check.

Upon the deputy arriving, she observed a female running onto the roadway into oncoming traffic. The deputy made contact with the suspect but she refused to comply. The Constable Deputy was able to then escort her off of the roadway for her safety.

As the deputy escorted her off of the roadway, the suspect grabbed the deputy by the hair and attempted to strike her with her fist. After a brief struggle, the deputy was able to detain the suspect and identify her as Mirabia Coble.

The female deputy sustained minor injuries and was treated on scene by EMS and was cleared to return to duty.

Coble was arrested and booked into the Harris County Jail, charged with Assault on a Police Officer. Her bond was set at $10,000.00 out of the 182nd District Court.