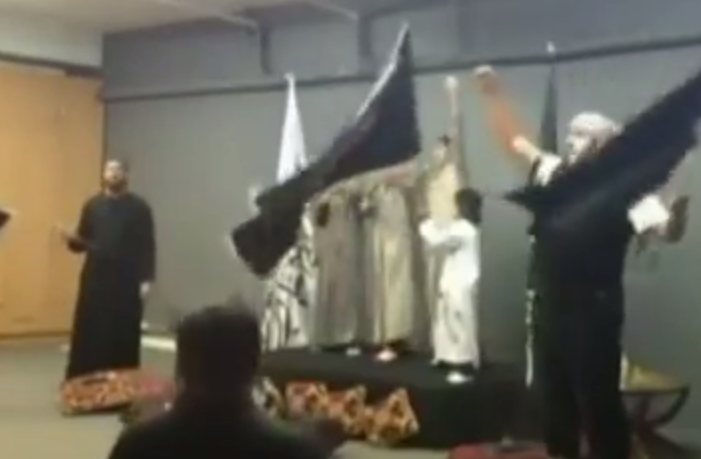 [SCROLL DOWN FOR VIDEO]

The video, uncovered by the Seven Network, purportedly shows four boys, aged six to 13, performing as “Soldiers of Khil­afa” or soldiers of the caliphate.

The performance took place at an event organised by the Muslim Youth Project, and is believed to be linked to hardline group Hizb ut-Tahrir, in Sydney’s Lakemba. Lebanese community leader Jamal Rifi condemned the group, saying the video made it clear Hizb ut-Tahrir was instilling in the boys the “building blocks of hate and unhappiness and a sense of not belonging”.

He said: “I would call on the mums and dads to be more ­informed about this group and about their tactics.

In the video, the boys are seen chanting, “You’re never too young to be a soldier for Khil­afa” and call for the creation of one Muslim ­nation without the West. They also say Mr Obama should go to hell and call for the head of Syrian President Bashar al-Assad.

Islamic Friendship Association of Australia spokesman Keysar Trad said the boys were not ­directly calling for violence, but were singing a song about the ­Syrian revolution.

He said that he had always been at odds with Hizb ut-Tahrir’s ideology, but he respected its right to voice its views.

“Their rhetoric brings harm to my religion, but I don’t believe they’re a violent group,” he said.